Richard Henry Geoghegan was the first Esperantist in the English-speaking world, later a friend of Dr Zamenhof, a member of the Lingva Komitato (Language Committee), and a remarkable linguist.

The family of Richard Geoghegan lived for many years at 41 Upper Rathmines Road, in Dublin, Ireland.  His father was a doctor who emigrated from Dublin to Birkenhead, England, in 1863, where Richard was born on 8th January 1866.

Many Irish Esperantists believe that Richard was born in Dublin, but this is not true.  That rumour came about because Richard often said, half-jokingly, that he was an Irishman. He was very Irish in character, often visited Ireland, and fluently spoke and wrote in the Irish language. Until he died in 1943 he corresponded, in Esperanto and in Irish, with Lorcán Ó hUiginn, sometime Chairman of the Irish Esperanto Association (vd Ch. 4).

At the age of three Richard unfortunately suffered a staircase accident at home, resulting from which he remained crippled for the whole of his life, walking with difficulty, often with the help of a stick.  But the good Lord, by way of compensation, gave him extraordinary intellectual powers, particularly in the learning of languages.  He spoke Irish, English, German, French and some other European languages and became an expert in Chinese, Japanese, Hindi and other oriental languages.

On the 26th July 1887 Dr Ludvik Lazarus Zamenhof of Poland published the Unua Libro (First Book) of his proposed International Language, Esperanto.  This was in the Russian language and afterwards he himself translated it into Polish and German.  One of his early followers translated it into French under the title La Langue Internationale, but there was still no English translation. Zamenhof knew some English but considered himself insufficiently qualified to translate his book into English.  A German friend of his produced an English translation, which Zamenhof published.  But it was a terrible, botched translation, and no-one could understand it.

In the autumn of 1887 Richard Geoghegan, who had for a long time been interested in the possibility of an international language, read an article about the newly-appeared language, Esperanto, and wrote in Latin to Zamenhof, who sent him the German edition of the Unua Libro.   He immediately learnt the language from it. Afterwards Zamenhof sent him the English translation. Geoghegan wrote back, alerting Zamenhof to the fact that the translation was a blunder that would only expose Esperanto to ridicule among English-speakers.  Zamenhof asked Geoghegan himself to do a better translation, which he did.  The bad translation was withdrawn and in 1889 Zamenhof published Geoghegan’s.  So began the movement in Britain, the US and Ireland.

The Enciklopedio de Esperanto calls Geoghegan the second on the list of Esperanto writers.  The first, of course, was Zamenhof himself.  It lists his main works thus: 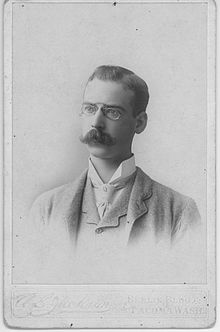 In 1893 Geoghegan emigrated to the United States and in 1905 he was elected first President of the newly founded American Esperanto Association.  He helped to found the Esperantist Society of Seattle.  He attended the discussions about the establishment of the Internacia Ligo (International League), an early form of the present Akademio de Esperanto, and in 1905 he was elected to the Lingva Komitato [language committee].  He helped also with establishing the Green Star as our emblem.  Dr Zamenhof wrote in 1911:

About the origin of our green star I no longer remember very well.  It seems to me that Mr Geoghegan drew my attention to the colour green, and from that time I began publishing my works with a green cover.  About one brochure, which I quite by chance published with a green cover, he remarked to me that this was the colour of his homeland, Ireland.  Then it came into my head that we could well regard this colour as a symbol of Hope.  As for the five-pointed star, it seems to me that Mr de Beaufront first printed it on his grammar-book.  I liked this and I took it as an emblem.  Afterwards by  association of ideas the star appeared with the colour green.

Geoghegan died in the United States in 1943.  He always stayed loyal to Esperanto.  He opposed all proposals for reform and fought against the Idists [proponents of Ido, a reformed version of Esperanto, which nearly wrecked the Esperanto movement in its early years – KK].  He was the greatest linguist and philologist of his time, and the fact that such a language expert accepted and used Esperanto, even in its early days, proved that Esperanto was indeed worth supporting and would win through.

Note the name 'Esperanto' refers to the creator, not to the language itself