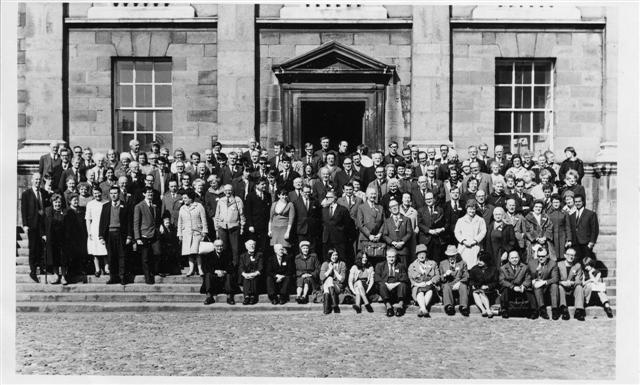 The Congress of that year was actually a joint congress of the British and Irish Esperanto Associations, and was the brainchild of two people, Jeremy Addis and Pat O’Reilly.  The congress was a brilliant success.  Nearly two hundred Esperantists participated from the following 13 countries:

At Dublin Airport there was a notice in Esperanto and a special information point for Esperantists.  Every congress member received a map of Dublin, a beautiful 32-page congress book and “latest information”.

The Inauguration and Welcome Evening was held on Friday, 4th April. On Saturday, the 5th, were the specialist meetings, films in Esperanto, buffet and dance.  On the Sunday (6th) there were the Annual General Meeting of the British Esperanto Association, Ecumenical Service, lectures, art and entertainment evening, etc.  On Monday, 7th April, there were excursions.

One of the participants in the Congress was Christopher Fettes, a young teacher at the College of St Columba, Rathfarnham, who later became Treasurer and, later still, President of the Irish Esperanto Association.